There are no standings showing for either the Breeder’s Cup races or the Breeders stakes.

Bumping this up since it’s almost August.

@Shanthi Just bringing this back. I’m sure people would love to start scheduling for the BC/BS (especially the BC in less than 2 months).

I was thinking the same thing. I’m at a point now where I may just bring all my good runners home and wait to see who I can and can’t get into the BC before I start arranging stakes races again. While I hate to put more of a load on Shanthi, we’re running out of time for nominations and stuff. And I’m the kind of person who gets nervous when I can’t plan way ahead. XD

I’ll try and get to this this weekend…I tried running things a while ago and it blew up.

Work has been completely insane the last couple of weeks or I would have debugged it sooner.

OK this should be fixed now.

Thank you so much Shanthi!!!

Trying to look to see where a few of my 2yos are at and see if it’s worth it.

Sorry to continue being a pain. Not sure if the Nominations page is communicating with the BC Rankings page. I just nominated Demonology for the BC Juvenile (#7) and he doesn’t appear on the rankings list: 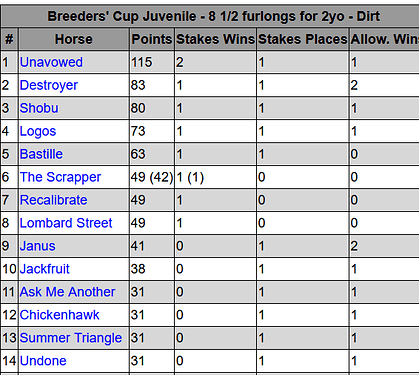 I’ve re-run the script which seems to have picked him up. There might be an issue with the supplemental nomination itself, but since none of my ponies have run this year I can’t test that. Anyone who is interested in supplemental nomination is welcome to PM me what horse/race and I’ll use them as a guinea pig for testing (since, if/when it works, the horse will be nominated).

(Failing that, the updates that run on each race day should work now, so worst case scenario the horse would appear on the list on the next race day.)

I just tried to Supplement Ancient Victory (View Horse: Ancient Victory) for the Juvenile Turf Fillies. She now shows as Already Nominated for the race (she is ranked 1 of 90) and when I look at my budget page, the Nomination Fee appears there, however, she does not show up in the Qualifiers List for that race.

Thanks @Starfish , I’ve nominated Charlotte’s Last and I think nominations should be fixed now.

@Shanthi I have quick question/clarification.

So I have More Dreams nominated for the Dirt Mile and he currently sits at 10th on the list.

But when I go to his nomination page, It shows him as being 46/731. Does this mean he has 46 potential runners ahead of him or is there a possibility of a bug with the supplemental nomination.

Probably the latter, it really shouldn’t be re-calculating where he’d be on the list if he’s already nominated.

Okay thank you, I was noticing this when I was checking some of my other runners. I was checking the numbers on the supplemental page to see if it’s worth nominating when the horse has a similar record to some of the ones already on the list, it was showing me really odd numbers.

So, correct me if I’m wrong here, but I think those numbers could potentially be accurate. If he’s already nominated, he’s gonna show up on the list if he is at the top of the pool of runners who have also already been nominated. But on the supplemental nomination page, it shows you where he stands in relation to all the other qualifying horses in the game. Of those 45 ahead of him, most probably aren’t nominated and thus won’t show up in the official rankings. His current rank of 10 would drop if they were nominated, though. At least, that’s my understanding.

I think the nominations page is only supposed to show nominated horses in relation to his rank, however. Otherwise it would be very hard to guess if it’s worth nominating a horse ranked 30th, when he’s actually #10 in terms of nominated horses.

I just nominated Memorial Castle who had been #15 on the supplement page, but is now #1 on the official BC Rankings page. When I saw he was 15, I knew several horses ranked higher than him wouldn’t compete in his specific race, so I took a chance presuming he’d be in the top 12 come race day. Him actually being #1 makes things a LOT easier (hah!), but for horses ranked in the 20-30’s (for example) it might be harder to guess if the nomination is worth it.